This is a pre-release version in an attempt to test some of the features that will be added in v4.0. A lot of exciting features have been added. Please have a look at the release notes bellow

You can now run and debug individual files. This is useful for debugging small snippets of code. To do this, right-click on the file and select Run File or Debug File from the context menu.

The LFortran linter is now available in the extension. It can be enabled by setting the fortran.linter.compiler setting to lfortran.

The Modern Fortran log channel has had a small revamp.

Logs are now colorised to make reading them easier

The extension dependencies are now installed using Visual Studio Code’s Tasks. That means that the commands are run from within the VS Code terminal, inheriting any environment variables already present. Particularly useful when using Python virtual environments. 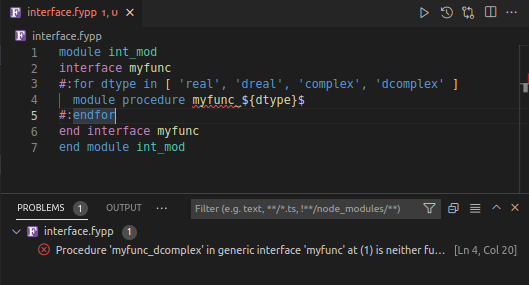 Some additional performance improvements have been made to the extension.

Improved performance of the linter

Converted the linter into using asynchronous processes, which should improve the overall performance and responsiveness of the diagnostics.

The native symbol provider (one used when fortls) is not present) has been updated
to use the new VS Code API.

Hide release notes when the extension in being installed or updated.

Added a new icon for the Fortran Language files