You people are awesome, I wasn’t prepared for this taking off so fast, I better try to keep up with the infrastructure for the webpage.

Let’s see how soon we can make a multilingual fortran-lang webpage reality.

Fantastic! I will contribute the Serbian translation.

This is how the French version could look. I have just translated the top of the page and I don’t pretend it’s the definitive translation:

Other French speakers are welcome for help!
Note that concerning the paragraph, I have first used DeepL then improved its translation (“close to the metal” is not easy to translate for example ! I mean it can not be translated literally…).

In the good old days of active g95 development, the English manual was translated to Czech, German, Japanese, French, Spanish, and Russian. These manuals could be useful in translating Fortran-related terms.

This is great! Thank you, I just looked at it and it will be an invaluable source for the vocabulary.

I don’t know if we have any computational linguists or Esperanto speaking scholars here, but there has been some interesting historical work done using Esperanto as a “bridge” language for machine translation, that I think deserves consideration. 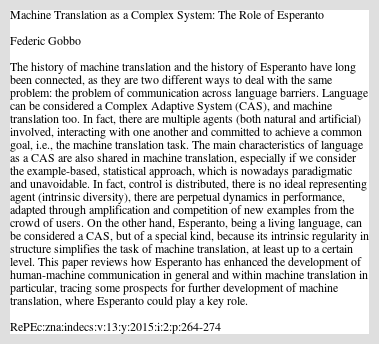 Machine Translation as a Complex System: The Role of Esperanto

The history of machine translation and the history of Esperanto have long been connected, as they are two different ways to deal with the same problem: the problem of communication across language barriers. Language can be considered a Complex...

Fortrano has a rather short Wikipedia page:

If there is a speaker with a sufficient level to edit the page? I learned it more than 15 years ago and I can still quite correctly read (~90%) but writing is a different issue… Not to mention the technical terms…

I have achieved a preliminary translation of the homepage (except some external parts which are “included” in the index.html file). My experience is that automated translation tools can be useful to accelerate the translation of paragraphs. Although you will often modify more or less some parts to sound better in your own language. Sometimes you need to modify what is said but keep the philosophy because a speaker won’t say that.

Sometimes you must deal with funny problems: for example the “Versatile” section. In French, versatile has a pejorative meaning! It means someone volatile, moody… So I replaced it by “Multiparadigme” (tell me if you agree with that modification!).

Concerning the technical terms, I have not encountered too many difficulties in French, except for example the part concerning the coarrays or the term single CPU (one microprocessor ? one core ?).

Next days, I will print both English and French versions and work on improving some details. I will ask here some more questions if needed.

For Polish, I entered the text on main fortran-lang.org page into DeepL and GTranslate. Both did their job surprisingly well. DeepL has even translated coarrays as tablice współbieżne which I find interestingly creative.

Inspired by msz59’s comment, I also tried to Google Translate fortran-lan.org page into Finnish. It’s mostly surprisingly readable, however many sentences are translated in a strange way such as “Imperative, procedural, array-oriented, object-oriented, or functional.”

It doesn’t even attempt to translate “coarray”, but I don’t think there even exists a word for that in Finnish. Many/most of such technical terms are nowadays direct loans from English.

Heh, I have no idea how to translate coarray to Czech either. Array is pole, but coarray? In English, the co seems to come from: co- - Wiktionary.

kopole? fits in with covariant, coordinate etc according to google translate.

In Serbian, “array” is “niz” and for “coarray”, “ko-niz” or “koniz” sounds most natural–“ko” is typically used in place of “co” for words appropriated from English (e.g. coordinate, collocated, etc.).

If we translate “coarrays”, we can

In that case, when you create a translation, it’s probably a good practice to write coarrays in parentheses, because the usage is new. Perhaps other people will use it in their documents, or not…

We can also, for the moment, keep the english word in italics if we can not find a translation that sounds good in our language and that will be immediately understood by the reader. Perhaps someone will find a solution later when more people use that programming technique…

In French, I have not yet found a translation. I feel that “comatrices” sounds good but it suggests a 2D array (a matrix). “cotableaux” sounds less good, perhaps because “tableau” is a common word (means also a painting), whereas “matrices” is a mathematical term…

Hyperarray would have been more easily translatable…

In Czech, kopole sounds weird to me, but perhaps that is the way to do it. Another option is what @vmagnin just said, and translate coarrays as parallel arrays (paralelní pole), which sounds good to me.

Polish tablice współbieżne as translated by DeepL, means literally concurrent arrays which seems to be pretty good translation of what coarrays are, doesn’t it?

Yes, translating coarrays as either parallel arrays or concurrent arrays both works well I think.

Thanks @certik, that’s what I was just thinking about: why not ask people living in English speaking countries to translate “coarrays”… in English? Using an adjective instead of a prefix… It could help translating in other languages.

I like concurrent arrays, it’s like concurrent do. Unfortunately, in my case there is a problem: in French, a concurrent is a competitor. So there is an idea of competition which I think is not in the English term (which seems more about simultaneity).

There is a lot of similar or identical words in French and English, but sometimes they are what we call faux-amis (“false friends”). They look the same but finally their senses have diverged…

Translation is definitely an interesting exercise…

I would suggest reading the first paragrahp on page 72:8 (and the footnote) of the recent article by Reid, Long, & Steidel - History of Coarrays and SPMD Parallelism in Fortran - to understand the origin of the term coarray.

I recall reading another document which claimed covariant tensors as the inspiration/source of the “co” prefix.

Edit: I found the reference:

The Encyclopedia of Parallel Computing also contains a sentence mentioning co-array is a contraction of “covariant array”.

In the case of Spanish, the Royal Spanish Academy (RAE) proposes some solutions for the translation of technicalities, neologisms and foreign words.

I think it may be useful to consult if the academies for other languages ​​have proposals similar to those of the RAE.

In this link you can read the proposal (list of words) of the RAE.