Delay Differential Equations (DDE) Solver: what DDE solver do you use?

It was originally from @ivanpribec reply, about Fortran delay differential equations, which is great!

Is there a good Fortran package for SDE, DDE and ODE?

The ones I am aware of for delay differential equations are: DDE_SOLVER DKLAG6 (predecessor of DDE_SOLVER) RETARD RADAR5 DELSOL For other types of ODE’s the page of Hairer includes several codes for both stiff and non-stiff problems. I believe many of them are heavily used across various fields. Another classic resource are the ODE solvers published at netlib. Unfortunately, most of them are F77 style codes which are not thread-safe. An exception is the rksuite which has a Fortran 90 interf…

I am checking S. Thompson’s DDE_solver and DKLAG6 solver,
https://www.radford.edu/~thompson/ffddes/index.html
Unfortunately, it seems Thompson’s website is no longer available.

After searching github, I do notice below there are two repos contain Tompson’s DDE solver, 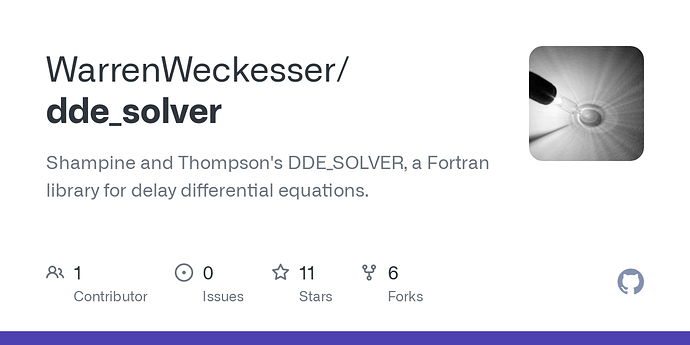 As both @Arjen and @ivanpribec pointed out, DDE_solver f90 come after DKLAG6, so perhaps no need for DKLAG6 anymore. So I do not know what should be the title of my thread, LOL.

Anyway, what Delay Differential Equations Solver(DDE) solver do you use?
Besides Thompson’s DDE_SOLVER, is Hairer’s solver good enough?

Another irrelevant question,
guys, if you learned the methods of Thompson and/or Hairer’s, and you write your own modern Fortran version of DDE and/or ODE solver. Is there a chance that your modern version can be significantly faster than code of Thompson and Hairer’s?

Thank you very much indeed in advance!

DKLAG6 apparently is a predecessor of DDE_SOLVER, so I would assume that the functionality is incorporated in the newer package. As I do not know these packages I may be completely wrong ;).
(Note though: the subject does interest me - from a recreational point of view, nothing I encounter in my work)

Thank you @Arjen !
Sorry my bad, I did not read @ivanpribec reply careful enough, and very loosely and stupidly mistakenly think DKLAG6 came after DDE_SOLVER. That is why I am actively looking for his DKLAG6 code, LOL.
Indeed, Thompson’s DDE solver should be better than his previous DKLAG6. I guess once have DDE_SOLVER, no need for DKLAG6.

I was curious about the dde_solver package so I have a few examples and run them. They stop with:
Program received signal SIGFPE: Floating-point exception - erroneous arithmetic operation.

This was with gofrtran 10.02.0 (on Windows). I have not investigated it in any detail ;), but Intel oneAPI Fortran is perfectly happy with running examples b2 and c2g. (There was a warning in the README for the dde_solver project.)

Found the problem - the statement starting at line 6274 is the culprit. MY_TRIM_FREQUENCY is zero, so the division is invalid. When I changed it to:

the numerical results were the same as for Intel oneAPI Fortran (at least for the one example I tried), with the exception of some print statements resulting in extra output in the result file instead of on the screen.

Found the problem - the statement starting at line 6274 is the culprit. MY_TRIM_FREQUENCY is zero, so the division is invalid. When I changed it to:

the numerical results were the same as for Intel oneAPI Fortran (at least for the one example I tried), with the exception of some print statements resulting in extra output in the result file instead of on the screen.

Thank you very much for the checking @Arjen ! 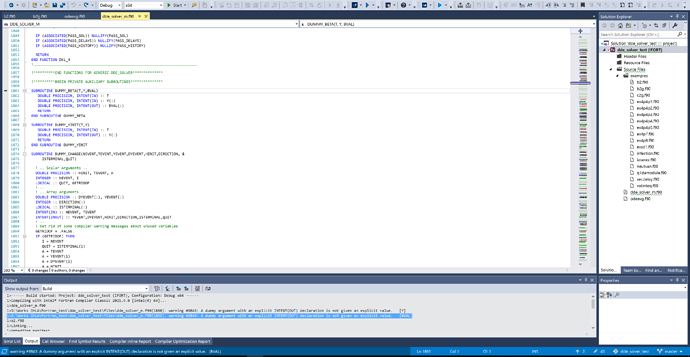 For b2 example, both debug and release mode works, 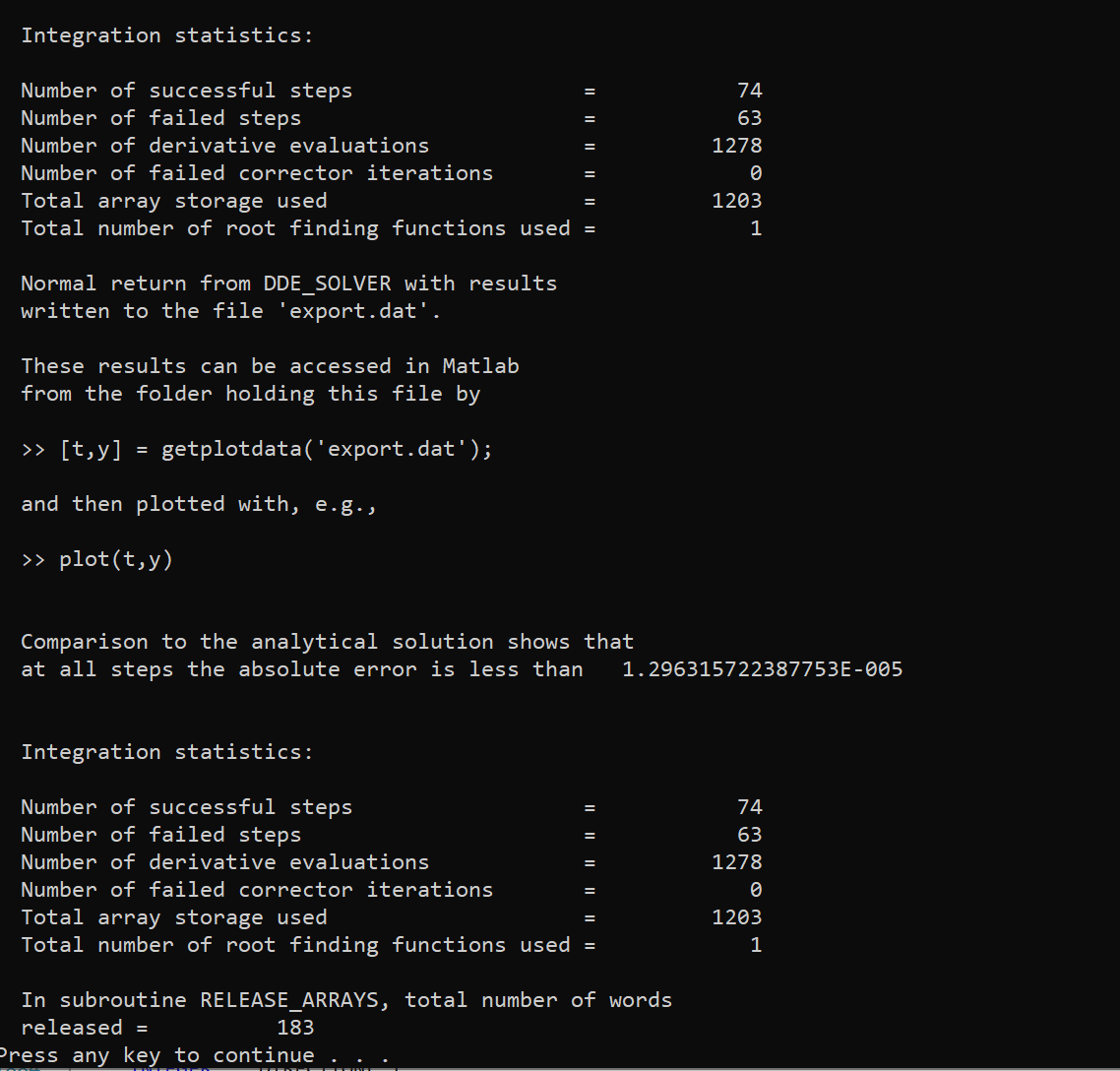 But in release mode, it runs and give the results below,

You could check my files and sln file in the gitlab repo below,

I will need to do some more testing too

With two data points (the error I found with gfortran and the error you spotted with the debug mode of Intel oneAPI Fortran) I conclude that there is a pattern: the code will work if “short-circuiting” is used - in the screen dump you can see the condition “I <= MYNGUSER” but also the use of I as an index in various arrays. I think the first condition needs to be checked separately:

instead of the combined condition.

Thank you very much @Arjen !
By the way, I found my copy of S. Thompson’s DDE website, I put it in the folder of my above gitlab repo, called A Friendly Fortran DDE Solver
You could download the foler, and click index.html and bingo!

Try the FortranCalculus compiler / language. It may solve ODEs and Algebraic equations all at the same time.

What Delay Differential Equations Solver(DDE) solver do you use?

There are many to choose from that are stored in a library. A user just picks one by name and makes a run. Then picks another and does the same; nice and simple.