Hi there. I have just joined this forum, which I reached while having some random walk at google. I would like to introduce myself, however, I haven’t found a corresponding subforum to do that, so I thought to post it as “uncategorized”. I’m a physicist from Argentina, I have a degree and a Ph.D. in physics, and I have been working with Fortran since I started my Ph. D, like 6 years ago. I’ve learned most of what I know of Fortran by reading, and hands-on. I started working in Fortran programming with other physicists, I’ve learned the basics in Fortran 77 (using common blocks, ending at the 72 columns, and the like). Then I moved to Fortran90. I have successfully parallelized my code with MPI and worked on supercomputers.

I’m always trying to improve my programming skills and my understanding of the language. I have found Fortran to be very intuitive, and I love it. However, most of what I’ve done have followed some sort of “intuitive” path, except for MPI, I didn’t have to rely on books to write my codes, and I think that might have produced some sort of pitfalls in my programming because sometimes reading a book written by an expert gives you a deeper understanding on what you’re doing. I have made some programming in C too, I still prefer Fortran. I would like to learn more about the language and its foundations. I’m actually willing to learn some assembler coding, in order to improve my understanding of low-level programming.

If you have any recommended reads on Fortran that can improve my general understanding of the language, be it in this forum, or from other sources, like websites, or books, it would be greatly appreciated. Of course, my interest is in scientific and high-performance computing.

welcome to the Discourse. You will find the learning materials written or gathered by our (your!) community on its main website (considered to be the new Home of Fortran):
https://fortran-lang.org/en/learn/

The learn page proposes tutorials, online resources, and good books (at the bottom of the page).

Have fun on the Fortran Discourse!

Thanks! hope to follow the interesting discussions that arise in this forum and to be up to date!

I have seen that some people proposed to make some “marketing” for Fortran. And I totally agree with that. I think Fortran77 would be a great name for a rock band

, and I would love to have black t-shirt that reads FORTRAN and nothing else. Fortran is amazing but suffers from bad press. Many times I’ve heard things like Fortran is archaic. I think that experts who know the most of how useful Fortran is, and how it is applied in industry and science, should shed some light on that so the general public knows about it.

In this regard, I would like to say that something interesting to do in this community (if not already done), which I have seen in other forums, is to send some sort of weekly, or monthly email listing the most notorious discussions. I think that can be automatized by listing the topics with more activity, which usually are the most interesting also.

Thank you again for the warm welcome

There was already a Fortran 5 band (rather techno-pop):

You can also print your own t-shirt with that picture of mine: 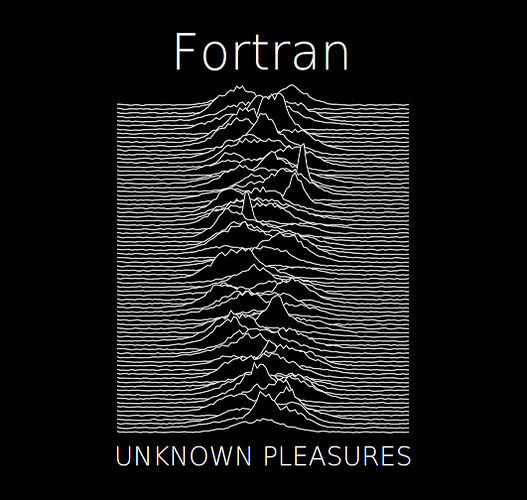 Concerning a weekly resume, it is probably possible. I receive such messages from the GNOME Discourse when I don’t connect too often. Here, I don’t know, I am connected nearly all the day!

You will find other Fortran commercial items in the Anecdotal Fortran posts:

stories and anecdotes about Fortran… Do you know 9548 Fortran ? I have just learned, by serendipity, in my fr.wikipedia.org: (9548) Fortran is an asteroid in the main asteroid belt. It was discovered by the Spacewatch program on February 13, 1985 at Kitt Peak. It has an orbit characterized by a semi-major axis of 2.376 AU, an eccentricity of 0.24 and an inclination of 9.65° with respect to the ecliptic. You wil…

Hi Daedalus, and welcome! (I like the nickname you picked as well).

From your background it is obvious you already have experience in Fortran programming, and the “intuitive path” you mentioned has its benefits as well, not to mention Fortran is easy to learn so it somehow encourages such a path. Experience is an invaluable, constantly evolving asset you won’t get if you won’t get your hands dirty.
Still, some good books are necessary. I guess we all have the one we consider “the book” - you know, the one that influenced us the most. Mine is about Fortran 90/95 and the language evolved since then, so there is no reason to name it - most of the stuff @vmagnin recommended is more up-to-date. At any rate, do not automatically assume introductory books are not useful for you, even if in theory you don’t need them anymore. Sometimes you find useful information even in introductory books/articles you wouldn’t expect - a detail, a tip for good programming style (very important!), a little something you didn’t know. It happened to me more than once.

As for machine language, well… I don’t know. Some decades ago it was more or less mandatory. I learned Assembly for the MOS 6502 and Motorola 68000 - I still use them from time to time on old machines. Today, however, I think “low-level programming” basically means C, which I consider a "high-level assembly’ rather than a high level programming language. I don’t think a Fortran programmer needs it, unless you port C libraries to Fortran, as I often do with multimedia libraries which are usually writen in C.

Many times I’ve heard things like Fortran is archaic.

“Archaic”, “ancient”, “obsolete”, you hear such terms about Fortran nowadays, especially by people who have no idea what they are talking about. At some point you get used to such nonsense, to the point you will even miss it when it’s not happening.

Hey. I got my t-shirt now 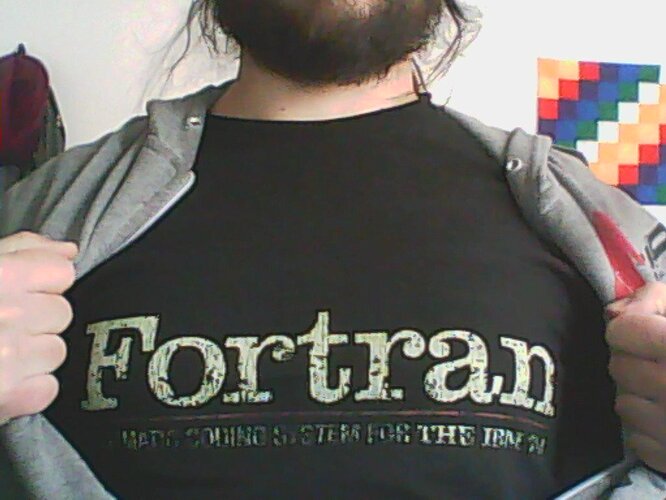 It looks used - or it’s just that by design?
Either way, I wouldn’t mind having one… Where did you get it?

However, I don’t think they will ship outside Argentina, but you can try if you like!

Absolutely modern as few people outside the Fortran community may still know what is an IBM 704!

And “Automatic coding system” sounds rather contemporary (like “no-code”).

The font seems to be the original Besley font used in the famous manual, and the motto is also the same. However, although the term “coding” was used in the manual cover, I don’t think anyone else used that term in the era of IBM 704 or even 3 decades later…
It should say “programming” instead, which is a much better term. No matter, I’ll take it anyway. The problem is that shipping from Argentina would probably cost much more than its original price. I might add a mate bowl and bombilla, together with several mate tea boxes in the packaging.

Come to Argentina instead! is pretty cheap now. I’ll give you a mate as a souvenir! it is a great programming companion, I would even prefer it over coffee! especially if you have a sensitive stomach as I do, which doesn’t allow me to drink more than a cup a day.

However, although the term “coding” was used in the manual cover, I don’t think anyone else used that term in the era of IBM 704 or even 3 decades later…

The FORTRAN Automatic Coding System is the title of a 1957 proceeding by Backus’ team, and the term is used three times in the text:

I would say that starting from FORTRAN, you can program

. Before FORTRAN you had to code (in assembly/machine language)