Fortran port of the Bessels.jl library

I’ve started a Fortran port of the Bessels.jl library, which I’m happy to share here:

First of all, let me send a shout out to the author, @heltonmc, that’s a hell of a library, congrats on the polynomial work! (I also did some of that working on combustion chemical kinetics functions, polynomials are great, you can check that out here if you’re interested).

So far, the implementation is stuck to the bessel_j0 function, if anyone is interested to contribute, please let me know!

Second, I’ve set the license to MIT, please do let me know if there are any concerns.

CPU time comparison on my local machine is reported for the test routine:

I guess I’m a little puzzled by this one, but I don’t really want to enter any CPU time comparison fights… but it seems like maybe a full port of this library will only be interesting if the other functions do perform better than this one.

I have made this comment in other threads, but perhaps it should be stated here too. There are two different goals when implementing the fortran intrinsic functions.

One is to give results that are fast with some minimal expectation of accuracy. If the user needs a more accurate result, then he is expected to write and use his own replacement function.

The other is to give results that are as accurate as possible, down to the least significant bit, and as robust as possible (with no unexpected NaNs, overflows, underflows, INFs, memory alignment problems, or memory allocation problems). Then if the user needs a faster result where some of those features are traded away, he is expected to write and use his own replacement function.

I agree with you, if one has no need for full 64-bit f.p. accuracy, it’s useful to have faster approximate libraries. That’s what motivated me to test the performance of bessels.jl in fortran.

Took a quick peek. SQPIO2 and nearby entities have ridiculously long decimal representations. You need at most 21 digits for double precision. All of the numerical constants need the _BK kind suffix, i.e.,

These are default real kind quantities, which may differ from REAL(BK)

Maybe you missed it, but this point was already challenged and expanded upon in the previous thread. The library function that Fortran is using does indeed have on average better accuracy bounds, but it also has a significantly longer tail of low accuracy results than the algorithm that Bessels.jl is using.

This trade off is much more subtle, and it’s hard to say what’s ‘better’ in general without discussing a use-case. 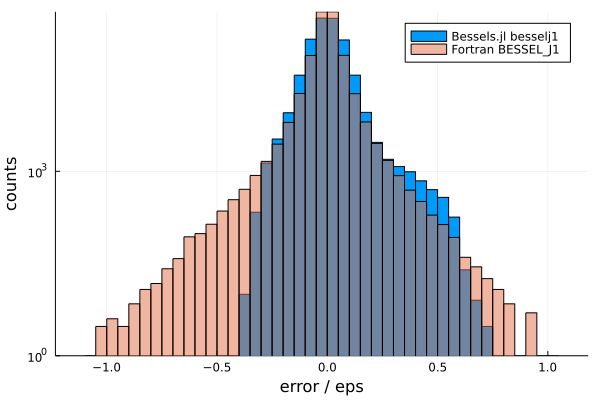 The library function that Fortran is using

Btw, I was just copying and pasting the exact same numbers from the bessels.jl source, thats why they have so many digits

In any case, I always error on the safe side and add the kind suffix to real
constants.

Ha. That’s a “no” then, pretty clearly stated tbh.

My bad, I never use that but it seemed like it was the best option to avoid pasting _BK after every number parameter (they were many…)

I think it’s fine to keep all the digits. Especially if the algorithm can also work for real precisions greater than double (eg real128). Even better would be to compute them at compile time with the actual equation (for cases where that is possible…not always the case).

I agree. The Julia source code mentioned some references but going back to them was not worth the effort - it looks like the author computed them in quadruple precision. tbh I think it will be more accurate to leave the very long strings anyways (e.g. that’s what folks in runge kutta and other integrators do) because if you do the whole calculation in lower precision and it’s more than a handful of add/multiplies, the resulting coefficient may be not so accurate…

It is well above quadruple precision. You only need 36 digits (some might claim 37) to get the 113 bits of quad precision. There are 79 digits in those strings, which is likely good for a 256-bit floating point number.

It’s not a rite of passage. It is an indication that someone forgot to learn about the language that someone is programming in.

I wish we were all like you and never make mistakes.

It is tough being me. But, let’s be real. In C, you have float, double, and long double. Literal constants are 1.3F, 1.3, and 1.3L. In Fortran, one needs to write 1.3 or 1.3_sp, 1.3_dp, and 1.3_xp with appropriate definitions of sp, dp, and xp. It does not matter what language one uses. What is important is to actually learn how to use the language. Not an earth shattering concept.

You’re both right . I guess I would expected that the F2018 [real(RK) :: ] thing would have come more in support of the users… I.e., put a type that then applies to all elements of the array… we’ve got assign instead lol!

Well, most of the achievements in computing nowadays seem to be made by going back to single precision (or even half precision) arithmetics. But for combustion, not an option.