Fortran Logo Refined
The “F” logo designed by Jacobs William (@jacobwilliams) and Milan Curcic (@milancurcic) is based on the F letter shown on the cover of the original IBM Fortran programmer’s reference manual in 1956. The idea is brilliant, but the logo uses Clarendon BT font, which, if you look carefully, is not the font used by the original reference manual. Therefore, I did some research and figured out a method to parameterize the “F” letter. Since this is a logo refinement for the Fortran programming language, naturally we want to do everything with Fortran:)

Github repo if you are interested:
Fortran Logo Refined

Hi, Milan
Thank you! Is there anything I need to do on my side (for example, publish a release)?

I would like to argue that manually overlay screenshots is probably not the best way to compare these icons, especially when the original “F” is not a print version but a very small area of a scanned book cover. This makes it nearly impossible to create an identical shape as the original “F”.

The way I compare it is to:

The result is shown below. 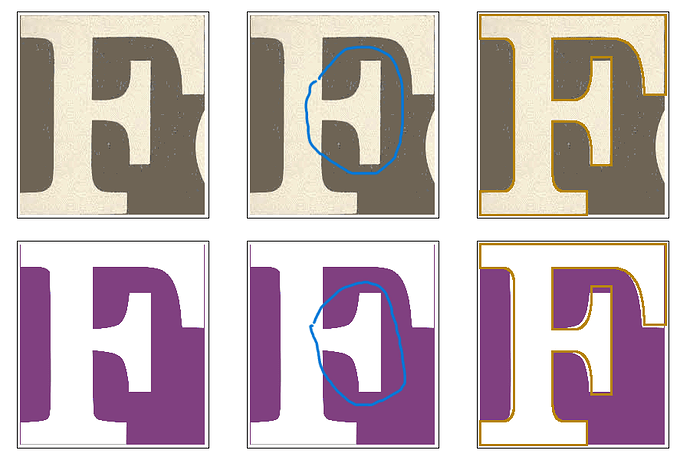 Map the rectangular shaped image to a square.

Why? Can’t it be rectangular? That seems to be the main difference in Jacob’s comparison (your font seems to match closely the logo of the book in one stretches a little bit it).

You are correct. The shape of the letter “F” does not have to be rectangular, in fact it’s width to height ratio is 23/25. However, when comparing the original and current version of the letter “F”, mapping them to a square makes it easier to compare. The main difference between the two is that the circled portion of the original “F” and the current “F” are not the same, and this is not due to stretching the image. The difference is caused by using different combinations of curves, where the current “F” uses only one quadratic Bezier curve while the original “F” uses two straight lines and a quadratic Bezier curve. This makes the two "F"s appear very different. 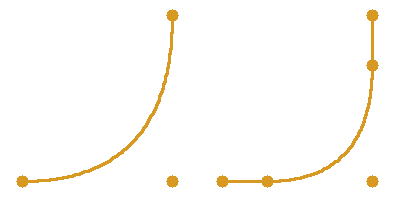 This is the reason that I think the original “F” is not Clarendon, or the Clarendon chosen in the current icon design.

The Clarendon font was and is sold by various companies, since its first release in 1845. These typefaces are not identical. Thatʼs the reason why modern (digital) variants differ from the typefaces available in the 1950s, of which one was used for the book cover.

I see. I agree that your version fixes that curve on the F. But I don´t get the stretching thing. I think you would be more convincing with a better overlap with the original font (which you have, if the F is not artificially squared).

I can’t distinguish the two logos. I assume that most people can’t either.

I think it’s pointless to debate about whether one logo more exactly represents the original letter F from the manual, or whether one or the other better resembles Clarendon.

We were inspired by the original F based on its classic aesthetic and it being on the Fortran manual, but exactly reproducing it is not necessary.

But consider these two stories:

I think 2 is a better story. It’s great to have an fpm package that allows us to generate the logo, or make variations to it.

That’s exactly what is brilliant and beautiful with the effort by @han190 . It is also great to see how the Fortran code is parameterized by @han190. It also hints at what is possible with Fortran, it reinforces my belief the computing domains really, really need to rediscover Fortran.

I don´t get the stretching thing

Since a logo is square, why not make the F square too?

I’m not totally following the reasoning for the changes. I think the F was stretched a little bit? It doesn’t look closer to the original manual F to me. I still like the current one better…

Also, when I remove the color, I’m seeing some rogue lines in the new svg: 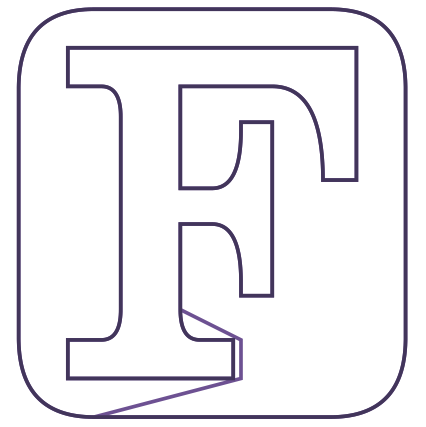 Not sure why those are there.

The original svg is very clean and only 5 kb. Sure, we could extract the curve from the svg and write it from Fortran, but I don’t really find that very compelling. The proposed new one is 47 kb and seemingly very complicated.

I can easily revert it back to square by adjusting the parameters in the parameters.nml. Perhaps offering a command line option for “original ratio” and “square” would be a better idea.
2. The svg file appears messy because it is challenging for gnuplot to fill an area with empty holes. To fill a connected area, a single closed curve must be created, thus the connected line.

edit: now the figure above seems to be perfect, isn’t it?

At least I’m happy with it. This was supposed to be a Lunar-New-Year-killing-time project, definitely not expecting lively discussions like this

, now I have a lot more to update for this project

I was impressed by the length of the Clarendon typeface Wikipedia page: 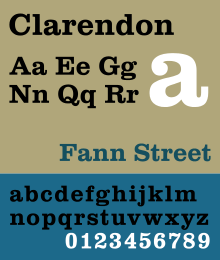 Pages for logged out editors learn more Clarendon is the name of a slab-serif typeface that was released in 1845 by Thorowgood and Co. (or Thorowgood and Besley) of London, a letter foundry often known as the Fann Street Foundry. The original Clarendon design is credited to Robert Besley, a partner in the foundry, and was originally engraved by punchcutter Benjamin Fox, who may also have contributed to its design. Many copies, adaptations and revivals have been released, becoming almost...

It says for example:

Clarendon fonts proved extremely popular in many parts of the world, in particular for display applications such as posters printed with wood type. They are therefore commonly associated with wanted posters and the American Old West.

@han190, you could make a Wanted poster:
Wanted
Fortran
born in 1957
crushing numbers faster than light