Emulators and interpreters in Fortran

Fortran is often perceived as a language suitable exclusively for numerical applications and not much else. However, digging a bit into the history I’ve discovered that a few computer emulators were written in Fortran:

Are you aware of any other historical emulators or interpreters written in Fortran? Do any of your Fortran programs in use today have an embedded interpreter? In case yes, what do you use it for?

NASA’s Copernicus contains a basic equation parser, which allows the user to input equations that can be included in the optimization problem, without having to compile anything. The parser is written in Fortran, and is similar to other Fortran equations parsers out there.

Does the original MATLAB count? There were copies of it on GitHub but I can’t seem to find one now.

It certainly does. I know @urbanjost has a derived version of it. Cleve Moler also wrote about in A History of MATLAB.

@jacobwilliams, Copernicus looks impressive! I noticed EIS-2 is missing from your list of equation parsers. It was featured at FortranCon 2020 in the talk from Christopher Brady. The book Illustrating FORTRAN (1982) also has an exercise on reverse polish notation illustrating the use of stacks. 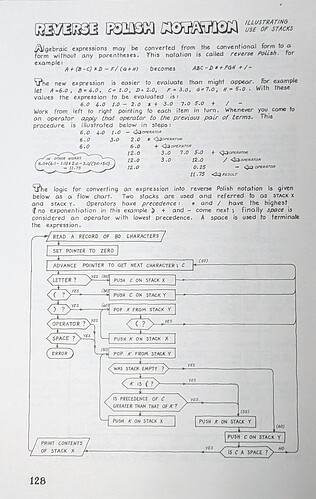 There is also the Fortran 2018 RPN Calculator which provides a lot more than just basic arithmetics.

I have used two interactive FORTRAN77 interpreters written in Fortran but a cursory search
did not produce any copies of them.

There are at least two scheme interpreters written in Fortran

I thought there was a FORTRAN77-like interpreter in ROOT from CERN,
but if there was it appears to be gone.

Westinghouse had a shell program written in fortran that incorporated graphics, a functional language and extensive math functions and a set of operators for working on tables of numeric values and self-describing data files that has been in use for at least thirty years although I do not know if it is actively maintained.

If I get some time I might be able to track some of those down. I know the scheme interpreters are used in actively maintained programs but I have lost track of some of the others

The DISLIN Graphics Command Language (DISGCL) is a scripting language for the DISLIN plotting library and seems to be written in Fortran.

By the looks of this open letter from 2019 they’ve already migrated to Python. This transition guide shows the same examples side-by-side in NCL and Python. There is quite a resemblance between Fortran and NCL. For the purposes used Python is not that different either.

Interesting. I was not aware of NCL. This directory has a lot of interpolation code. Some of which I’ve never seen before (e.g. SPLPAK). Definitely something that needs to be rescued and modernized!

S, the predecessor of R, was written in Fortran:

S is a language that was developed by John Chambers and others at the old Bell Telephone Laboratories, originally part of AT&T Corp. S was initiated in 1976 as an internal statistical analysis environment—originally implemented as Fortran libraries. Early versions of the language did not even contain functions for statistical modeling.

In 1988 the system was rewritten in C and began to resemble the system that we have today (this was Version 3 of the language).

LISPF4 is a Lisp interpreter originally written in Fortran.

Thinking of S/R; DATAPLOT from NIST is an interpreter as well as a huge amount of Fortran statistical code, and includes vast amounts of documentation and generates plots as well.

The IBM Fortran H compiler (late 70s?) was largely written in Fortran H . Fortran H had extensions for bitwise operations and structures. I haven’t been able to find source for it, though.

but no code. I have heard similar (a lot of bootstrapping Fortran code) but have never seen it
and I looked for it a while ago; but more-or-less just out of curiosity.

Fortran compilers were on machines with as little as 4K words of memory (might be off, but still amazingly little). Amazing they got it working.

syntran, by Jeff Irwin, which can run the following code (taken from the Readme.md):

A collection of artifacts from logic programming languages beginning with Marseille Prolog.

Blockquote
From June to the end of the year [1973], Gérard Battani, Henri Meloni, and Rent Bazzoli, postgraduate students at the time, wrote the interpreter in FORTRAN and its supervisor in Prolog

Some of the very early Lisp environments were implement in ancient dialects of Fortran:

Blockquote
This paper concentrates on the development of the basic ideas of LISP and distinguishes two periods - Summer 1956 through Summer 1958 when most of the key ideas were developed (some of which were implemented in the FORTRAN based FLPL), and Fall 1958 through 1962 when the programming language was implemented and applied to problems of artificial intelligence. After 1962, the development of LISP became multi-stranded, and different ideas were pursued in different places.

Slightly related, I see this as my ideal computing environment, with Fortran, C, or C++ being used for performance critical areas.

Blockquote
A mixed-system architecture is developed, in which Fortran and Prolog are each used to best advantage, and which allows discrete events to be combined with pseudo-continuous processes. The architecture is analysed in terms of a number of performance metrics. The paper concludes that the mixed architecture is feasible, practicable and brings a variety of benefits.

Thanks for sharing the interesting finds.

The computer algebra system FORM also started out in Fortran. It was featured last year in an article: Crucial Computer Program for Particle Physics at Risk of Obsolescene | QuantaMagazine