After recent discussion around building tooling for fpm, I cleaned up a schema for the Fortran package manifests I had lying around. I tested the schema by validating all ~150 fpm projects which were published on GitHub until October 2021 (I need to update my list). 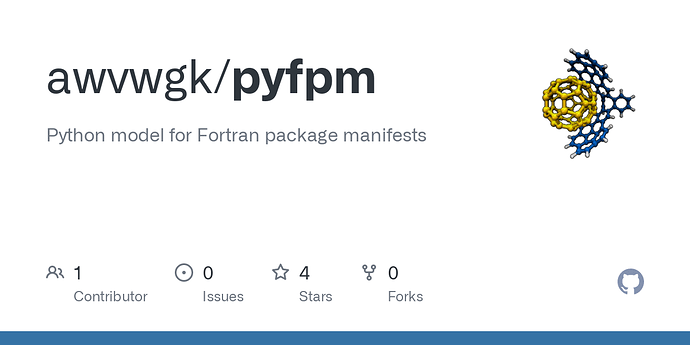 Python model for Fortran package manifests. Contribute to awvwgk/pyfpm development by creating an account on GitHub.

The schema is defined using a Pydantic model to map the manifest to a Python object. While I like Pydantic for the possibility to quickly create a schema from type hints, the error reporting is somewhat minimalistic. I should note that creating the object from the package manifest is left as exercise for the user:

The round-trip is a bit more difficult, since many TOML libraries in Python don’t know how to deal with None values, rather than not printing the value they usually raise an error… meaning you have to prune the dict first from None’s before writing the manifest again.

I also exported the model to JSON schema and uploaded it with the release, in case anyone wants to try it for other tooling other than Python.

Maybe we can use the exported schema once we create our own schema validator in Fortran:

This was originally raised in a thread on Writing a linter in Fortran: Personally, I consider TOML Fortran as low-level library, providing schema validation would therefore be out-of-scope for the core project. However, having a project providing schema support for TOML Fortran and maybe other IO libraries like JSON-Fortran by @jacobwilliams or rojff by @everythingfunctional seems like a much more appealing choice. One crucial point might be defining the storage format of the schema in the fi…