We just released version 0.5.0 of the Fortran package manager: 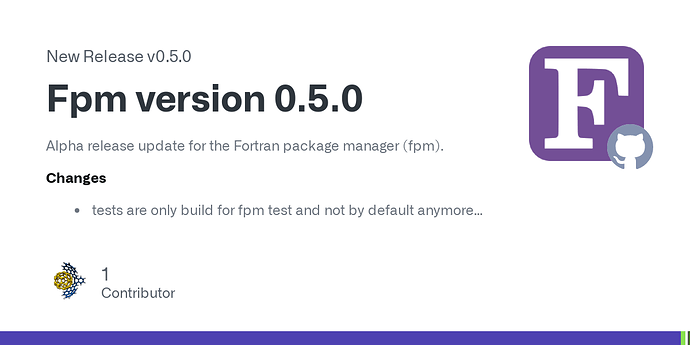 Alpha release update for the Fortran package manager (fpm). Changes tests are only build for fpm test and not by default anymore (#572) environment variables for setting Fortran and C compiler ...

We have a large number of bug fixes in this release and made plenty of improvements to the tooling around fpm, like the continuous delivery and the Windows installer. New features include the possibility for better compiler/linker selection and the improved build backend (test are only build when needed, link dependencies are properly tracked). Please, let us know what you think.

Many thanks to everybody who contributed to this release. We are really happy to see code contributions from ten developers in this release!

@awvwgk, thanks for releasing fpm and thanks for maintaining it and pushing it forward. We all really appreciate it. What are some of the features you would like to see in the next release?

Here is one issue that might not be difficult to implement:

Change how output is presented

that would make the output look great. If anybody here is looking for an issue to contribute, this might be a good one to get involved with the fpm development.

Since I had the issue, someone else might run into it, too:
Note that fpm changed the default branch name to main.
Therefore, if you used the fpm repository prior to this release, you might want to run git switch main in order to get the most recent version.
(You might have to run git fetch first)