Advent of Code is an Advent calendar of small programming puzzles for a variety of skill sets and skill levels that can be solved in any programming language you like.

The first puzzles will unlock on December 1st at midnight EST (UTC-5). See you then!

We should create a leaderboard for Fortran-lang again.

Or we can use one of the previous years:

I’m looking forward to participating in this again.

Let’s use the same leaderboard as last year. Every year gets a separate score, and you can still see the scores from previous years. The leaderboard code is 1510956-4380811b and you have to enter it here (you need to be logged in, otherwise you’ll get redirected elsewhere).

One can find Fortran solutions for the 2021 edition on GitHub with Search · aoc-2021-in-fortran · GitHub. I suggest that the analogous topic be used for the 2022 edition.

While overengineering today’s AOC tasks, I stumbled into some limitations of Fortran (or maybe limitations of my Fortran skills?).
The task is to parse a list of integers, sum up each group and find the maximum. The way I tried to do it was a kind of parser. The general structure of function calls looks like this:

The first problem I had was the fact, that there is no straightforward way of handling exceptions. If the innermost read hits eof, this information has somehow to be handed back to the outermost function.
I tried to do this by returning allocatable integers, where an unallocated integer would have meant, the file has reached eof. Unfortunately, Fortran cannot return this kind of information, so I had to add an logical :: eof to my reader class. Similar to this, I needed a way to handle empty lines. In this case, I can simply return 0, but I’m asking myself if there is a better solution, especially when the parser logic would be more complex. Would I require an eof equivalent for each level of abstraction/function (or a more general status variable)?

Contribute to Carltoffel/aoc22_fortran development by creating an account on GitHub.

Funfact: In contrast to this highly overengineered Fortran solution, you can solve the puzzle with one line of “shell” or Python:

That does seem like overengineering, but that can be fun. I started out simple. 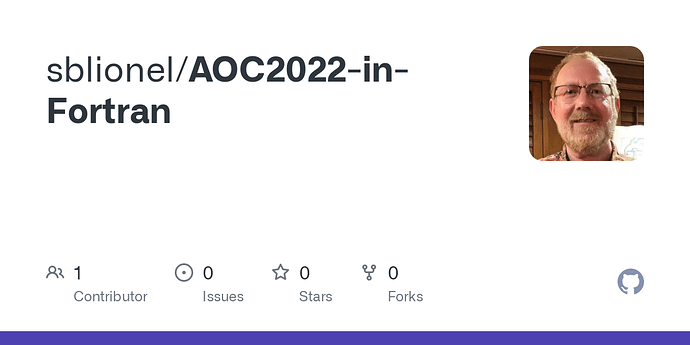 Contribute to sblionel/AOC2022-in-Fortran development by creating an account on GitHub.

I wrote a simple program that seem to do the work

Funfact: In contrast to this highly overengineered Fortran solution, you can solve the puzzle with one line of “shell” or Python:

I am probably going to do most of them in awk again, much fun. Maybe I’ll also do some in Fortran. 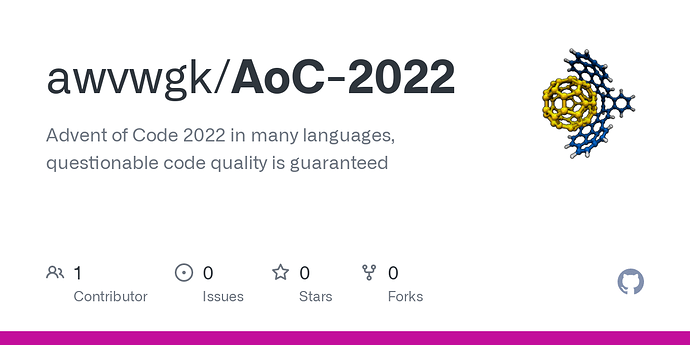 This is an expensive way to look for a blank line. The trim() function must first scan the line to look for the last nonspace character, then allocate memory, then copy characters into that new memory. Then the len() function looks to see the length of that new character string. The len_trim() function just does the first step, it scans the line and returns the integer result. Of course, a compiler might recognize the dead code in the len(trim(line)) expression and do the right things anyway, maybe with some level of optimization being specified, but why depend on that when len_trim() is right there?

However, there might be other ways to answer the question, and I’m not sure which is best. The expression line==' ', returns .true. for a blank line. Character string comparisons in fortran test the leading characters for equality, in this case a single space, and then ensure that the rest of the line has only trailing spaces. That might be more efficient since the compiler can do those tests on multiple bytes at a time. Also, that expression arguably looks simpler to a human reading the code. That comparison also works with a zero-length string, '', but I usually compare to a single space out of habit (f77 did not allow zero-length strings).

The best solution to this would be for the read statement to tell you how many characters it read, so you could limit the subsequent comparisons to just those characters. This was a feature of 1970s-era DEC VAX I/O, but unfortunately it never made it into any fortran standard.

The best solution to this would be for the read statement to tell you how many characters it read, so you could limit the subsequent comparisons to just those characters. This was a feature of 1970s-era DEC VAX I/O, but unfortunately it never made it into any fortran standard.

The SIZE= specifier in an input statement causes the variable specified to become defined with the count of the characters transferred from the file by data edit descriptors during the input operation. Blanks inserted as padding are not counted.

I took the challenge of doing this with the shortest possible code.

I’ve just found the shortest way of dealing with blanks is:

Maybe I should use FORTRAN77, that would save further bloat…

For Day 2, I got really nice mileage out of the INDEX intrinsic, to look up values in a 3x3 payoff matrix.

I am probably going to do most of them in awk again, much fun.

Understandable, you have basically awk in your name: AWvwgK

If you want to shorten the code, then remove the FileName parameter and place the name literal directly in the open statement. Remove the declarations to unit, ios, meal since they are implicit integer anyway. You can remove the close() statement since the file will be closed anyway at the program end.

Also, if you just want to reduce the number of lines, then put the entire program on one line with the statements separated with semicolons.

I have some ideas to save more lines:

nice trick I didn’t know about! I was also thinking of replacing if/then/else with an arithmetic if.
EDIT: the whole program could be refactored as

now down to 9 lines!

For day 2 (second part) I used FINDLOC instead of INDEX. I thought what I ended up with was rather elegant.

now down to 9 lines!

@FedericoPerini , did you test your code? Was not the task the one listed here i.e., on the penultimate line in the link?

If you care to strive for some code readability, a level of correctness, and the fewest characters in code as opposed to fewest lines which makes little sense, you might consider the following: