You will note that we had to release v3.1.0 instead of v3.0.0, due to some semver ordering issues.

A summary of the changes can be found below:

The linting diagnostics have been improved, with supported being added for
the Intel’s compilers, allowing custom compiler root paths and additional
diagnostic messages such as preprocessor warnings. 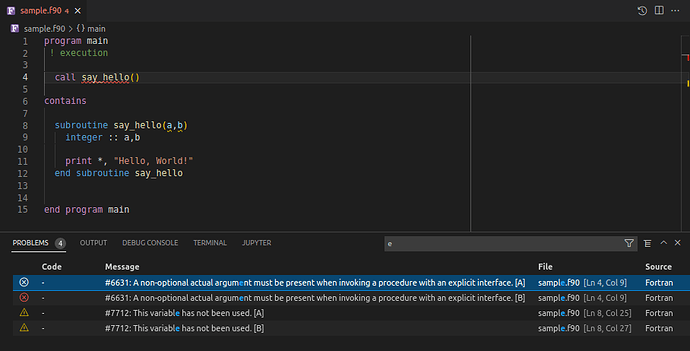 Preprocessor warnings and errors are now properly supported during linting

Modern Fortran will prompt you to install fortls with pip upon initialization if
not detected in your system.

In case there is no explicit setting for a fortls option, you can pass the
option to fortls through

It is now possible to have Language Server support with fortls for multiple
workspaces and single files. Simply open a standalone Fortran file and fortls or add a
folder to the workspace.

There are 2 ways of passing options to fortls either through the VS Code
settings.json or through the fortls configuration file.
fortls is listening for changes on both types of files and will pass them to the server
without having to restart.

Warning: This feature is experimental if changes do not take effect you
can always restart fortls through the Command Palette.

Two convenience commands have been added, accessible from the Command Palette with
the prefix Fortran:

Debugging functionality was previously limited when it came to nested
user-defined types and hovering. This issue has been resolved and full
information about an object can be shown in the hover messages while debugging.

Due to the plethora of changes to the Modern Fortran extension the following
VS Code extensions are redundant and no longer compatible with Modern Fortran:

The following settings have been deprecated are replaced by the following:

There are a number of other bug fixes, feature enhancements and minor
improvements that have taken place in both the extension and the syntax highlighting. A brief list is shown below:

Absolutely wonderful piece of software!
As a gnu/Linux user (open-suse) is there anything I must do to get the latest release or it will update automatically at the next package manager update?

It should autoupdate (that is the default setting in VS Code). You can however make sure that your version is v3.1.0 by doing the following (see v3.1.0 next to the Extension name)

BTW if someone knows people that currently work at Intel on the Fortran side of things, could you point them to this release to notify them that we support their compilers for linting now. I don’t think they are aware.

Thanks @FortranFan and @gnikit ! I’ll give it a try with VS Code on my Mac and put a reference on our User Forum.

Unfortunately, the link is broken (404).

Since some time (weeks, months?) I get these messages and no pipping or configuring seem to fix it. Does anybody else have this problem?

Then link must be old, I’ll update it, here is the working link: Configuration options - fortls

As for the fortls version, it would appear that you are using an outdated version. Specifically the outdated fortls is the one spawned by VS Code with the option:

just use the default version

It’s unclear how this can be done. Should I delete the option? I thought this option is exactly meant to point to the system version of fortls.

You will have to provide some more info, there is a number of things that can be going on.

Sorry, your first reply sounded like the solution was self-explanatory. That’s why I didn’t provide more info. I think I found the problem, see below.

For the sake of completeness:

Apparently upgrading to a new version didn’t work but didn’t print an error either, while VS Code continued using the old version. And whenever I tried to uninstall, it only removed the (working or not) new version, not the old one.

I had not tried to uninstall the same package twice in a row. Didn’t know that was even possible. Thanks for your help!

I have 2 points to mention:

I am building a code with cmake in a directory located in:
$BUILD_DIR/myCode

The modules are present in directory:
$BUILD_DIR/myCode/modules

I gave that information to the extension:
Fortran > Linter: Include Paths
$BUILD_DIR/myCode/modules

and as it didn’t work, I also add it to:
Fortran > Linter: Mod Output
$BUILD_DIR/myCode/modules

But fortls doesn’t find the modules.

I entered full path for modules and includePath but it is still not working. Here are few screen captures: 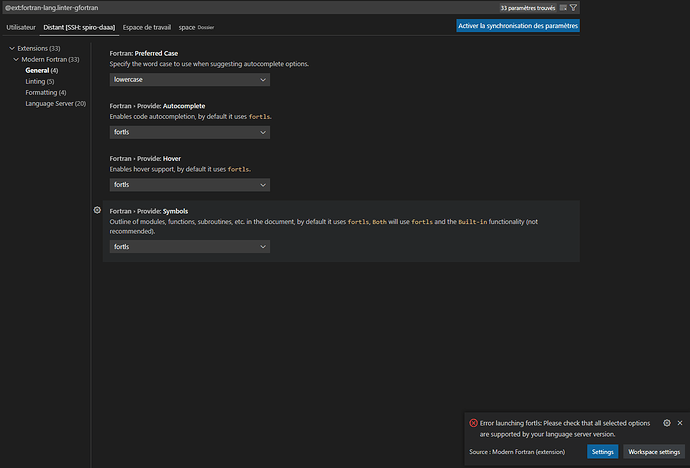 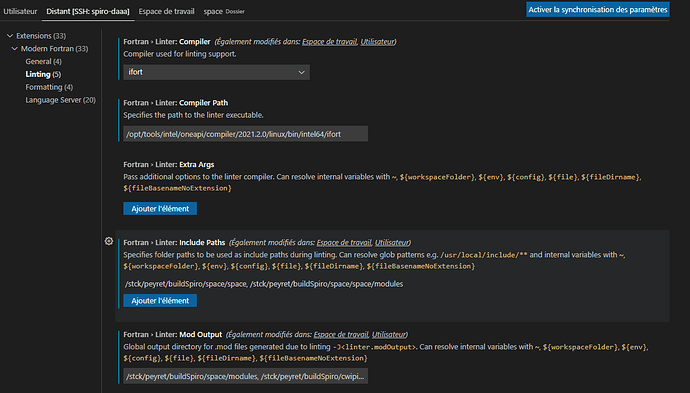 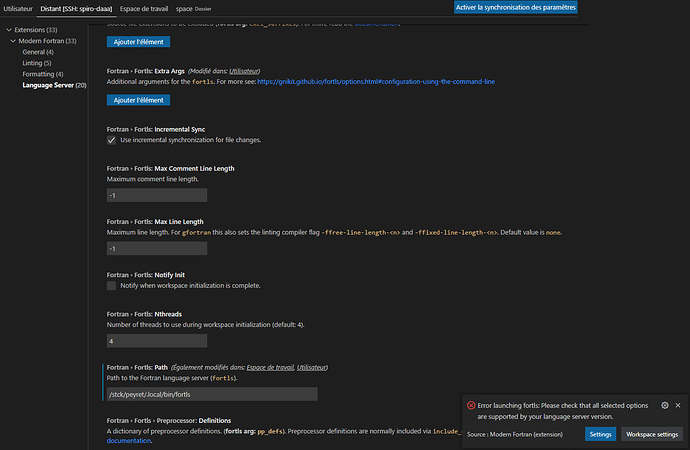 and for the second point, I am unabble to show the structure of Fortran files: 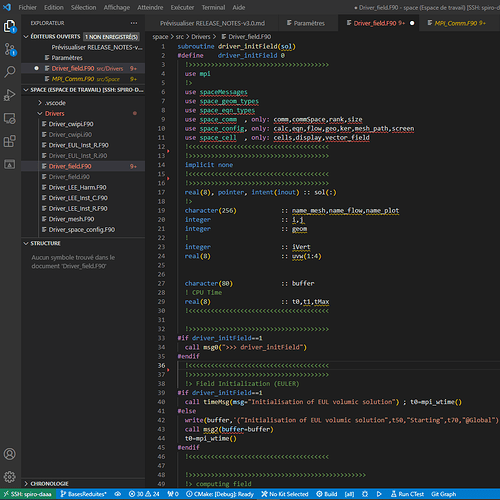 First of all, welcome to the community @Christophe!

One obvious thing I noticed is the include Paths. There should be one item per line, so that should fix the linter (most likely). If you have any other compiler flags that you use for compilation e.g. -DHAVE_MPI you need to pass those to the extra args, (one per line).

Is that location to the fortls binary working? You can find out by doing something like this in a terminal

FYI when it comes to sharing settings for VS Code it is easier if you send the relevant parts of the settings.json. You can change between the UI and the JSON format via that little icon

Here is the output for Modern Fortran 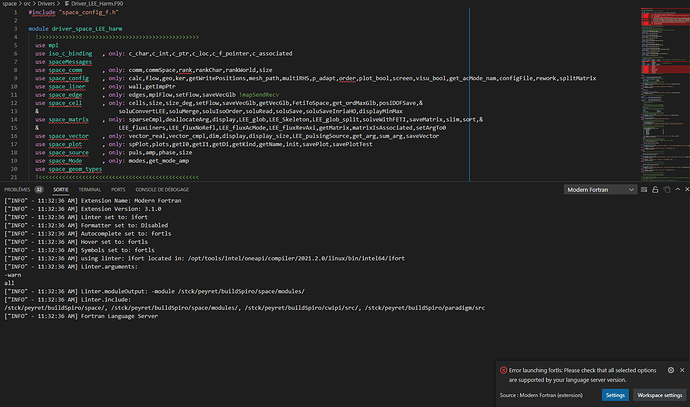 I still think you "fortran.linter.includePaths" are wrong, there should be one path per line in the output and the settings UI should look like this

As for fortls I am not sure what’s going on. What version are you using?

But I still do not succeed to see the list of procedures and function contained in one file.