When using code that follows convention 2 b), I would set ERRMSG to blank before the call and check that it is blank afterwards.

In this situation, unless STAT is nonzero, there will no reason to reference ERRMSG at all and which is the case with intrinsic procedures (and statements),

I was thinking of a particular type of functions. See this little program:

Believe it or not, its output with (one version of) gfortran is:

and apart from the number of decimals, built with Intel Fortran it produces the very same output.

I would never use a library that returns NaNs.

Just adding a bit of self-promotion for an error handling library that I wrote a while back: GitHub - samharrison7/fortran-error-handler: Comprehensive error framework for applications requiring functional and robust error handling, utilising the power of modern object-oriented Fortran.. It’s quite comprehensive (i.e. overly complex), so might be overkill here, but some of the concepts are similar to what is being discussed.

It goes down the returning a derived type path, mainly because I was new to Fortran when I wrote it and returning values via routine arguments felt… uncomfortable. But that does make it quite clunky (e.g. there’s a different derived type for different rank return data)

And then the code this is called from could look like:

Might have the syntax slightly wrong as I’m on my mobile, but the principle is there.

Internally, the ErrorHandler just prints out the error and triggers an error stop when it is triggered - so not very elegant.

I was thinking of a particular type of functions. See this little program …

So if you’re authoring a function FOO similar to SQRT and LOG, you will be KISSing your users by employing ERROR STOP the minute you realize something is out of whack (such as x < 0.0 ) rather than letting other events and actions trigger the same action way downstream of the source where the root cause could have been identified.

if your intent is to package in a FOSS public-domain library, then if you have a way of knowing when the function result can be outside the range of expected values such as with function input outside of valid domains, you would do well to ERROR STOP explicitly,

As much as I agree with your statement in a previous post that one should not return a NaN on error, I don’t find using error stop in a library a good idea.

Whether on is writing a FOSS library or a company/group internal library that is used in more than one project it is key to appreciate that we, as the library author, don’t know how others intend to use the library. There are multiple scenarios where an error stop inside a library procedure would not be acceptable for me as a library user:

For libraries in particular I think it’s very important that

Following these guidelines will make the library much easier to integrate into various applications which, of course, is our goal when writing a library.

I don’t find using error stop in a library a good idea.

Agreed. There are many cases in which a single error does not make much (if any) difference on final results. Examples include image processing (you always find some bad pixels or cosmic rays on the CCD chip but it has no meaning for the 99.99% of the results calculated on, say, 4k x 4k chip or, even less so, 512M CCD mosaic), probably also (though I am no expert) in weather modelling etc. Forcing error stop to a complicated process running for hours is definitely not a good idea. And even if the error cannot be just ignored, it may well be much easier and less resource consuming to do a simple check for error (examining a single integer variable) than to check validity of every point of data, which may involve much more calculations.

The behavior that failure terminates the program unless an error code is requested is common in Fortran. Statements like allocate or open behave like that (optional IOSTAT or STAT argument).

That is why I suggest to either error stop OR state whether a return value that something went wrong. The library user needs to decide whether a failure is acceptable, not the library developer. Unfortunately, this means that functional programming is impossible because a function cannot return two values and Fortran has no mechanism to catch errors.

Unfortunately, this means that functional programming is impossible because a function cannot return two values and Fortran has no mechanism to catch errors.

Agreed. This is very unfortunate. Not only for the desire of programming in a “functional” style, but for the use of pure functions in general. With the current set of language features pure functions can realistically only be infallible.

What Fortran really would benefit from is support for rich enumerations or tagged unions. Then one could write functions that either return a value (with a specified type) or an error (with another specified type). This should preferably be combined with good generics support to avoid boilerplate code.

The best workaround I can think of today is to define a type, e.g.

and then only allocate one of the members depending whether the function failed or succeeded, for example:

I think this is similar to what @samharrison7 proposed in a previous post.

… I don’t find using error stop in a library a good idea. …

The context of my comments is the situation by OP with a FUNCTION that can encounter an error (OP then used sqrt and log as illustrative examples).

With current state of Fortran, one can resort to use SUBROUTINE subprograms under the circumstances which was next point in my suggestion, or employ ERROR STOP in the FUNCTION.

There are decided benefits with the use of FUNCTIONs in expressions and there is the whole paradigm of functional programming predicated on particular values with the approach. Then if the exceptions are truly as they should be i.e., exceptions, then proceeding with the use of FUNCTIONs with ERROR STOP will be the lesser of the “evil”. NaNs will soon lead to an error stop anyway but after if it has infected most or all of the system but with little idea as to the source of the exception.

Then if the exceptions are truly as they should be i.e., exceptions, then proceeding with the use of FUNCTION s with ERROR STOP will be the lesser of the “evil”.

Agree. If the error scenario is really exceptional then a error stop might be appropriate. Preferably with proper documentation along with the relevant procedures.

Given its name It is actually quite ironic how often exceptions are thrown around in codebases written in certain mainstream languages.

This has been my typical practice. Unfortunately there is a bug in gfortran that I first encountered a year ago (and was reported a year earlier by someone else) that will break this pattern in all but the simplest of cases. I wish one of the gfortran developers would tackle this one.

That’s very unfortunate as I agree that this is the best practice, and as some of the other posts have noted, it can be combined with error stop in the case that stat and/or errmsg are not given. Given that it is not fixed now, it will likely take a number of years before a compatible version of GFortran is provided generally through package managers.

Modern Fortran needs exception handling. Fortran is way behind on this, as in many other things that modern programmers expect and depend on from other languages.

Being way behind can also be an advantage to “do things right” when the time comes. As an analogy my home village in rural Slovenia has optic fiber (because it arrived very late), while cities in Germany are stuck with old DSL connections.

Here’s a C++ talk on De-fragmenting C++: Making Exceptions and RTTI More Affordable and Usable - Herb Sutter CppCon 2019 - YouTube, which shows the opinions on exceptions are fragmented. I’ve taken a snapshot of one of the slides: 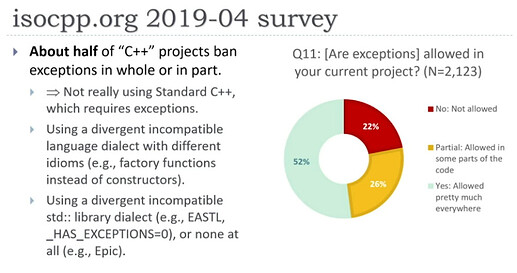 I also used to be of the opinion that what Fortran really was lacking was exceptions. However lately I have begun doubting that this is the best way forward. The downsides with exceptions are multiple and significant, among others:

Seeing how Rust solves this has led me to believe there might be a better way forward for Fortran. Interestingly Rust error handling is very similar to Fortran in that fallible functions require explicit handling of the potential error.

The difference is in that Rust has language features and a standardized strategy for propagating errors throughout the code. This essentially boils down to support for generics and functional style enums/tagged unions which makes it possible for a function to either return a value or an error in the Result enum. In addition there’s the question mark operator which is basically just syntactical sugar that makes returning early in the event of an error easy.

Take the function in my previous example as a starting point. Use of this function could look something like this:

The Rust way would conceptually look something like this:

Or even more compact:

I find both reading and writing this sort of fallible code very pleasant: When writing, it is near impossible to forget to handle a potential failure. When reading, it is obvious what code might fail and which actions are taken in case it fails.

I’m not saying that Fortran should just do exactly like Rust, but seeing that there exists a good solution that conceptually is the same as we do today makes me believe that there are alternatives to exceptions. I also believe a solution along these lines would fit much better into an existing fortran codebase where parts of the old code probably would use an integer or logical argument to check if calls have failed.

Exceptions has one significant advantage though: Especially for the successful code path they are probably the most performant way of implementing error handling.

… My question is: what is a good strategy? …

@Arjen and anyone else interested in this, shown below is a keep-it-simple strategy recommended based on current Fortran standard and all that it entails i.e., no built-in exception handling, etc… The basic approach is as I suggested upthread .

A couple of comments with above:

Yes, when I say Fortran needs exception handling, I don’t mean to imply that it should have exactly what C++ or Python or whatever has. I just mean the language needs some standardized way to handle exceptions and errors. What we have now is basically nothing, so every program and library has to roll their own (or just error stop LOL when there is a problem). It makes building an ecosystem very difficult.

Some things can be handled in libraries, but error exceptions should be in the language.

… just error stop LOL when there is a problem …

To reiterate, ERROR STOP is only suggested for FUNCTION subprograms.

Fortran has already done half a step into exception handling in the C++/Python style when it comes to floating point exceptions:

Theoretically, one can use this functionality to implement exception handling in a broader scope. Every time something goes wrong, one sets the IEEE_invalid flag. This is more or less equivalent to using a global variable, just that the compiler takes care.

It is also interesting to see that the topic is discussed for at least 25 years:

It is also interesting to see that the topic is discussed for at least 25 years:

Thanks for the references. The 2nd link did not work for me, but Error handling in Fortran 2003 did.