I added December below. The rating did dip from November but is up strongly from a year ago, and Fortran remains in the top 20.

Looking at the long term history below, I don’t think Fortran rose from 6th to 3rd in usage from 1986 to 1991, only to plunge afterwards – the downward trend was probably more steady. Maybe Fortran 90 becoming an ISO standard in 1991 caused the bump in that year.

To see the bigger picture, please find below the positions of the top 10 programming languages of many years back. Please note that these are average positions for a period of 12 months.

I think Fortran is actually very comparable to Lisp. I don’t know if they include all Lisp variants (like Scheme, Racket, etc.) in it. If so, then it’s surprising how it is going down. It used to be on par with Fortran, then both dipped. But Fortran might have stopped the fall, I am still not completely sure, but it looks promising. Lisp, on the other hand, keeps falling. I also think Lisp is facing a lot of unfair bias against it, just like Fortran. Both are old languages, perhaps with archaic syntax, and people often have strong reactions to both. But if you are able to look past the syntax and evaluate the language on its merit, Lisp has its uses, it’s actually an interesting and influential language. As is Fortran, in different domain.

Both are my favorite languages. As much as I am saddened by them falling into disgrace, I am happy that their spirit and legacy is alive and thriving. Clojure, Haskell, Nim, Julia, Python and even MATLAB are only there because of ideas furthered by Lisp and Fortran.

There is another language I admire and which is almost forgotten: Smalltalk – even though the ideas it introduced have become backbone of modern programming practice.

There will always be limited space for niche, pure and idealistic languages like Lisp and Smalltalk. Maintainers of Fortran understood this well, albeit a bit late, and introduced support for multi-paradigm programming. Perhaps this arrested the downfall. But I also wonder that if every language starts including features of every other language, to keep its user base healthy, what is the use of having multiple languages at all? May be I am generalizing too much!

I think Fortran is actually very comparable to Lisp. I don’t know if they include all Lisp variants (like Scheme, Racket, etc.) in it. If so, then it’s surprising how it is going down.

I think their Lisp number does not include variants, since those are mentioned separately. Languages 100-n to 100 in their alphabetical list are
Racket, REXX, Ring, Scheme, SPARK, SPSS, Transact-SQL, Vala/Genie, VHDL, XSLT, Zig

@mfurquan mentioned Nim, which interests me, since it has the syntax and functionality of Python (but not all the libraries) but with static typing and much greater speed, maybe half that of C.

Newbies who hear about “Lisp” are more likely to search for “Racket”, “Scheme”, or “Clojure”, as they get all of the press. Common Lisp is the only dialect that can trace its history all the way back to variations of McCarthy’s lisp. Code from the pre-history of AI should still run on any conforming CL implementation, which has a number of open source alternatives.

The rating drop in Jan 2022 is a bit concerning, but I also doubt that interest in Fortran more than doubled from Jan 2021 to Sep 2021.

From the graph: Fortran | TIOBE - The Software Quality Company, unless it gets back up in the coming months, then I would say it was just a fluke / noise, not a signal.

In the ups and downs in these curves, it is possible to lose the general picture. Since each point is a measurement, I speculate an illustration offering an optional moving average/moving standard deviation would be advantageous over the one currently offered. The principle is old (control charts) as seen e.g., in chemical engineering, except a target value/upper and lower critical value isn’t set here.

Thus, after a digitization with WebPlotDigitizer (quick and therefore much more noisy than using Tiobe’s underlying data), some number crunching and eventually calling gnuplot: 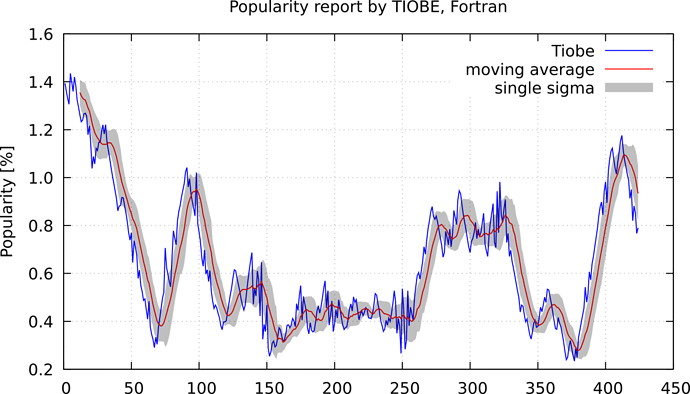 Why are you putting so much effort into analyzing tiobe when their methodology is so bad? IEEE and PYPL are much better indexes since they measure searches rather than search results.

@oscardssmith Well I have not. The scripts used were already used for a different purpose and different data set; thus it was only an exchange of the input data.

Why are you putting so much effort into analyzing tiobe when their methodology is so bad?

Others can answer why they do it. My personal interest is simply that whatever TIOBE does, it favors Fortran, and so I like it for that reason only. It’s advertisement, and Fortran badly needs it. Is it unfair? Possibly, but so is all the unfair dismissing of Fortran in possibly all other venues, so if finally one venue randomly (?) advantages Fortran, I have no problem with it.

Not sure how many Fortran users migrated from Stack Overflow to here.

I used to ask Fortran questions on SO. I have switched to Fortran Discourse completely since I discovered it in August 2021.

Excellent point. Fortran-lang has first helped and then harmed the TIOBE rankings.

Not sure how many Fortran users migrated from Stack Overflow to here.

I think SO and this discourse have slightly different goals, as our discourse allows more general discussions and open-ended questions, while those are generally discouraged in the SO context. I know of some members of this community engaging both here and on SO answering questions. It is not mutually exclusive, but there is some overlap.

However, I also recall a discussion where several people opted against linking to SO from the webpage because of previous bad experience with that platform (see Add links to other related Fortran communities by awvwgk · Pull Request #219 · fortran-lang/fortran-lang.org · GitHub). The decision we took back than might be different today, though.

This link suggests TIOBE Index is based on search engine results and that StackOverflow.com is not among the engines that qualify for their index determination:
Programming Languages Definition | TIOBE - The Software Quality Company

StackOverflow.com is not among the engines that qualify for their index determination:

Fortran fell to 23rd in February, with a rating drop as well.

It must be due to TIOBE methodology changes

As of the 1st of May, the Alexa web traffic ranking engine is going to stop its services. Alexa was used to select the search engines for the TIOBE index until now. So now something has to change. Similarweb has been chosen as the alternative for Alexa. We have used Similarweb for the first time this month to select search engines and fortunately, there are no big changes in the index due to this swap. The only striking difference is that the top 3 languages, Python, C, and Java, all gained more than 1 percent in the rankings. We are still fine-tuning the integration with Similarweb, which is combined with a shift to HtmlUnit in the back-end. Some websites are not onboarded yet, but will follow soon. Now that HtmlUnit is applied for web crawling, it will become possible to add more sites to the index, such as Stackoverflow and Github. This will hopefully happen in the next few months.

It was good while it lasted, but now the party is over. Let’s simply focus on doing the work of rejuvenating Fortran and the results will come.

Is anybody interested in helping with creating graphs from github to rank computer languages by the number of new repositories per month (as well as cumulative)?

There is a Github Language Stats (madnight.github.io) that counts issues/pull requests/pushes/stars/licenses for GitHub projects, and I believe their dataset (*.json) is stored and updated here.